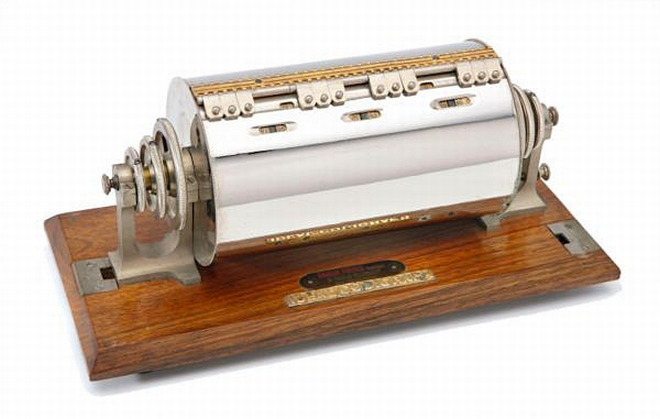 The Ideal Codigraph is a French enciphering machine built around 1909-1910.

This machine is not a cryptographic device in the normal sense. Rather, the purpose of the "enciphering " is not to encrypt plain text for secrecy but to save money on telegram transmission costs. The machine translates numbers into pronounceable words which are all 10 characters in length and also decodes them from letters back to numbers.

The development of the Codigraph was driven by the prevailing costs of sending a telegram at the beginning of the 20th century. Telegrams were sent in Morse code, but numbers were not sent as such. Each time a number was embedded in a message, it was spelled out in full. Using the number  "38554"  as an example, thirty eight thousand five hundred fifty four is a lot of short words.

According to the tariff regulations of the "International Telegraph Union" [1] telegrams were charged by the word which could consist up to 10 characters.  A word which had more than 10 characters was counted as two words. Under this pricing structure, it was very expensive to send a telegram so people were constantly searching for any opportunity to shorten the message. But the words in a telegram had to be composed of  pronounceable syllables in order to facilitate and to accelerate the work of the operators manning the Morse keys. That was also part of the regulations. Unpronounceable words or character strings such as  "WGHZKBDHSCX" were not allowed, otherwise the sender would be charged for every single character as a new word.

The Codigraph was a solution for the part of the problem - sending numbers.  The machine transforms numbers into words of 10 characters each with pronounceable syllables. This is the reason why the apertures in the Codigraph normally show  two characters - a consonant and a vowel. The so-formed words can be pronounced by a human and be exactly  ten characters in length.